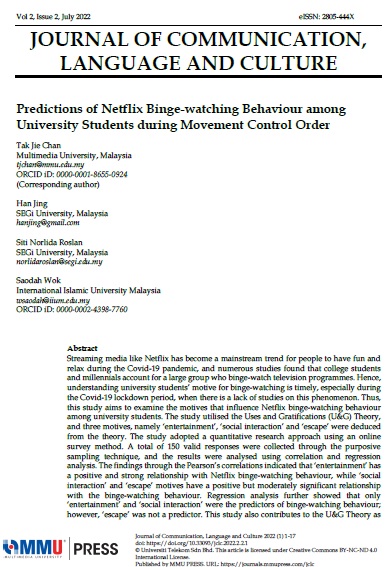 Streaming media like Netflix has become a mainstream trend for people to have fun and relax during the Covid-19 pandemic, and numerous studies found that college students and millennials account for a large group who binge-watch television programmes. Hence, understanding university students’ motive for binge-watching is timely, especially during the Covid-19 lockdown period, when there is a lack of studies on this phenomenon. Thus, this study aims to examine the motives that influence Netflix binge-watching behaviour among university students. The study utilised the Uses and Gratifications (U&G) Theory, and three motives, namely ‘entertainment’, ‘social interaction’ and ‘escape’ were deduced from the theory. The study adopted a quantitative research approach using an online survey method. A total of 150 valid responses were collected through the purposive sampling technique, and the results were analysed using correlation and regression analysis. The findings through the Pearson’s correlations indicated that ‘entertainment’ has a positive and strong relationship with Netflix binge-watching behaviour, while ‘social interaction’ and ‘escape’ motives have a positive but moderately significant relationship with the binge-watching behaviour. Regression analysis further showed that only ‘entertainment’ and ‘social interaction’ were the predictors of binge-watching behaviour; however, ‘escape’ was not a predictor. This study also contributes to the U&G Theory as well as the literature on the youth’s media consumption, particularly during the Covid-19 lockdown period, for it benefits the parents, video streaming service providers and government in understanding the motives that influence binge-watching among youths; thus, strategies can be implemented to avoid excessive binge-watching behaviour during the lockdown which leads to negative social media outcomes.