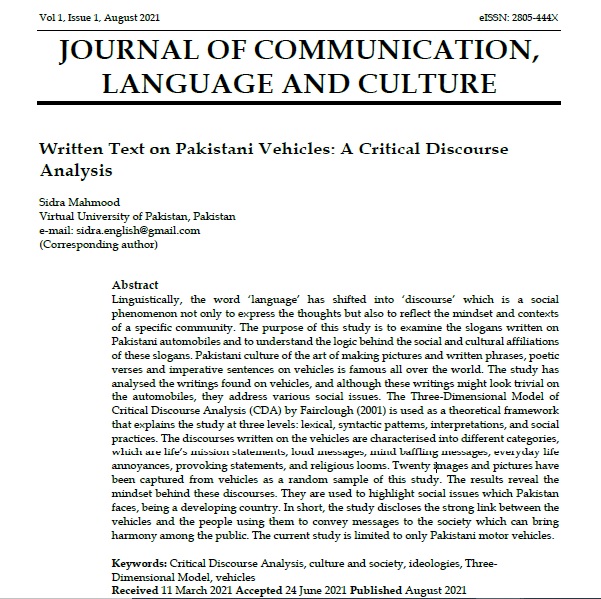 Linguistically, the word ‘language’ has shifted into ‘discourse’ which is a social phenomenon not only to express the thoughts but also to reflect the mindset and contexts of a specific community. The purpose of this study is to examine the slogans written on Pakistani automobiles and to understand the logic behind the social and cultural affiliations of these slogans. Pakistani culture of the art of making pictures and written phrases, poetic verses and imperative sentences on vehicles is famous all over the world. The study has analysed the writings found on vehicles, and although these writings might look trivial on the automobiles, they address various social issues. The Three-Dimensional Model of Critical Discourse Analysis (CDA) by Fairclough (2001) is used as a theoretical framework that explains the study at three levels: lexical, syntactic patterns, interpretations, and social practices. The discourses written on the vehicles are characterised into different categories, which are life’s mission statements, loud messages, mind baffling messages, everyday life annoyances, provoking statements, and religious looms. Twenty images and pictures have been captured from vehicles as a random sample of this study. The results reveal the mindset behind these discourses. They are used to highlight social issues which Pakistan faces, being a developing country. In short, the study discloses the strong link between the vehicles and the people using them to convey messages to the society which can bring harmony among the public. The current study is limited to only Pakistani motor vehicles.